Istvan Andras Komáromy (pronounced Com–arr-roh-me) was born in Dusseldorf, Germany in 1910, to a Hungarian civil engineer father working on the building of the Rhine bridges. The family returned to Budapest in Hungary shortly afterwards, where he grew up and subsequently studied medical science. In the late 1920s, such students had to purchase or make laboratory glassware and Istvan discovered he had a talent for glass blowing, making scientific glassware for fellow students and thereby creating additional income. This led to a fascination with glass and he began making artistic art deco-style glass items in his spare time.

Impressed, his professor sponsored Istvan on his first exhibition, launching his career. He attended major venues around Europe, at which the young glass artist won a number of gold and silver medals. In Milan in 1931, he was described by the Italian School as “the Michelangelo of glass” – quite a tribute from any Italian! 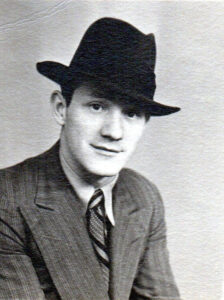 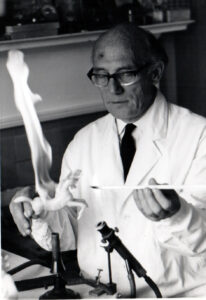 All of Komáromy’s glass pieces were made using a Bunsen burner and either solid or tubular coloured or opaque glass rods. He used over 200 kinds of glass, subsequently manufactured in the UK at Plowden and Thompson in Stourbridge to his own recipes.

He called himself a sculptor in glass although he also blew – using this technique for the various glasses, vases and sculpture bases he made. The larger pieces he made required controlled cooling to prevent cracking and instant destruction for which he adapted a conventional gas oven.